15 Feb The Evolution of the Projector – Digits and Shadows

Evolution of the Projector

In the era of digital technology, the projector is surviving. Not only this, it is continuing to evolve. Resolutions, aspect ratios, brightness and onboard features are improving yearly. Here at ToomeyAV, the projector is one of our most popular products. For over five decades we’ve been supplying Irish schools with projectors. That’s a long time. But projector technology has been around for longer than that. This post will trace the evolution of the projector from its origins in the shadowgraphy of prehistory right up to today’s powerful digital machines.

The Origins of the Projector

Shadowgraphy, or shadow play, was the first step in the development of the projector. Shadow puppetry has a long history in Asian countries such as Indonesia, Thailand, China and India. In its earliest form it involves the manipulation of shadows of hand movements thrown by a fire. Its major purpose was entertainment, and it still is today. 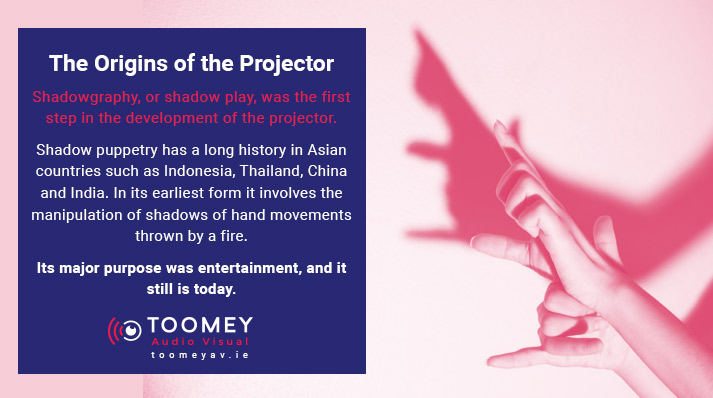 The next major step in the projector’s evolution was the Chinese magic mirror. The origin of these can be traced back to the Han Dynasty (206BC – 24AD). A pattern embossed on the back of the mirror is seen in a projection when light is reflected from the front onto a wall or other surface.

The revolving mirror also has a long history. An early European variation was described by Frenchman, Jean Prevost. Cut out figures of a small army were placed on a wooden platform rotated by a cardboard propeller above a candle. The figures cast their shadows on paper on the outside of the lantern.

From 1500 to 1700, major advances in projector technology were made. The helioscope, a telescopic solar projection system, was conceived by the Italian mathematician, Benedetto Castelli, c. 1612. The stenographic mirror, which also uses concave mirrors, was invented by the German Jesuit scholar, Athanasius Kircher, c. 1645. The concave mirror also found its way into the magic lantern, which was developed by Christian Huygens c. 1659. This projection system became popular for entertainment and educational purposes in the 18th and 19th centuries.

Projectors continued to evolve up to the 19th century, with the invention of the solar microscope and the opaque projector or episcope. The opaque projector displays opaque materials by shining a bright lamp on the object from above. In the 20th century, it was produced and marketed as both a toy for children and a tool for artists, allowing images to be traced on surfaces such as a canvas. In the middle of the century, overhead projectors became widely used in schools and businesses. Slide projectors also emerged and were used primarily for entertainment purposes. Around the turn of the millennium both types began to be replaced by today’s digital projectors. 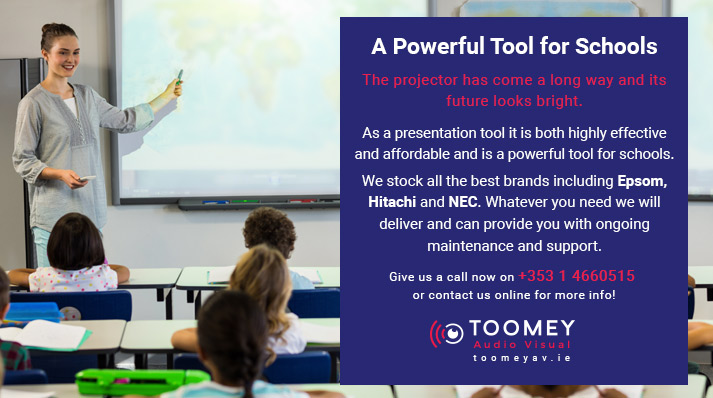 A Powerful Tool for Schools

And that brings us to the end of our brief sojourn through the history of projector technology. The projector has come a long way and its future looks bright. As a presentation tool it is both highly effective and affordable and is a powerful tool for schools. We stock all the best brands including Epsom, Hitachi and NEC. Our projectors can be used in school halls, business presentations and conferences. We supply both short throw and long throw projectors. Whatever you need we will deliver and can provide you with ongoing maintenance and support. Give us a call now on +353 1 4660515 or contact us online for more info!

Don’t miss out on future blog posts and be in with a chance to win a €100 voucher by joining our mailing list now!